T-Rex’s Reptile 2 analog tape-style delay delivers the warmth and depth of a great vintage tape unit in a compact and road-worthy pedal. A quartet of knobs handles your standard delay controls, while dials for Speed, Width, and Tone fine-tune the flutter of the repeats.

3 controls dial in the delay’s modulation

Input gain control on the side

Danish tone pioneers T-Rex Engineering have been making quality effects pedals and guitar gear since the 1990s. T-Rex pedals are made using some of the best components in the industry, like film/foil electrolytic capacitors, lifetime-use pots, and rugged footswitches, toggles, and connectors. T-Rex’s better-known pedals include the Replica digital delay and Mudhoney distortion, which can be found on the pedalboards of top guitarists David Gilmour, John Mayer, Mark Tremonti, and Steve Morse, as well as many of Sweetwater’s players. 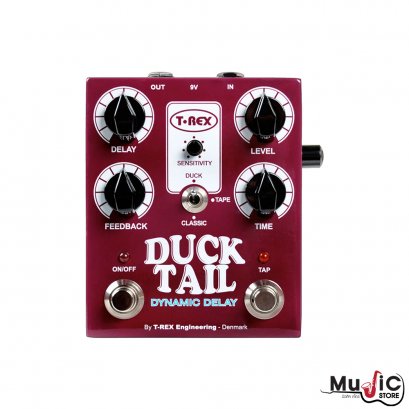